The third field session took place in the summer of 2019. Its objective was to obtain new data on the functioning and dating of the fortification system of the site.

At the end of this field session, we can state that the previous planimetries must be corrected, especially for the western sector of the Acropolis. Indeed, although it is certain that fortifications existed in this sector due to the presence of blocks at the bottom of the slope, the only possible attestation of such a structure is a double-faced section: it is very partially preserved over a length of 8 m, but its blocks and construction technique are completely different from those (more recent?) of the South wall of the Acropolis. Although restoring (without any evidence) a wall in the continuity of the South Wall of the Acropolis towards the West, our predecessors had not been able to find the slightest trace of it: indeed, we were able to rediscover a series of deep trenches perpendicular to the slope in the western sector, but none of them show any remains of this wall.

A targeted intervention in the central part of the south wall of the Acropolis made it possible to determine the construction technique. The filling of the wall consists of several very compact layers of mixed fill materials and a large quantity of clay soil. This fill is leaning against the sloping natural rock, without a second facing wall having been found so far. As it stands, the Acropolis wall is therefore similar to a retaining wall for a terrace. However, it is not excluded that an interior facing wall was built at a height that has not been preserved, thus providing a path for circulation on a fortification wall. These embankments are separated by dividing walls, forming a series of “caissons”, which made it possible to contain the land and to distribute the pressures exerted by the slope. These developments are probably part of a major earthworks project for the Acropolis. Thanks to the study of the potery, it is possible to fix the terminus post quem for the erection of this wall at the end of the 4th BC. This is an important dating element obtained in stratigraphy for a ‘Lucanian wall’. This phase also seems to include the main entrance door to the settlement (Porta Maria), which was built using similar construction methods: a quadrangular structure and a supporting embankment leaning against the natural slope without a second facing wall that has been preserved.

An investigation of the fortification system at the eastern end of the site uncovered a square tower that Francesco Ranaldi had excavated in the 1950s. It is perfectly joined to the main enclosure wall to the east and west. A strange triangular appendix is attached to the eastern part of the tower. This plan, quite unusual in southern Italy, suggests the importance of this area: it turns out that an ancient path used by shepherds and their herds passes through this place, which most probably reproduces the layout of an ancient road. 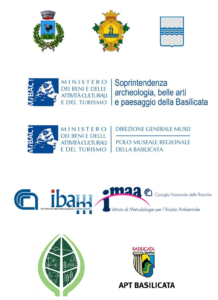